Come and View a Fisherman’s Boat From the Time of Jesus! 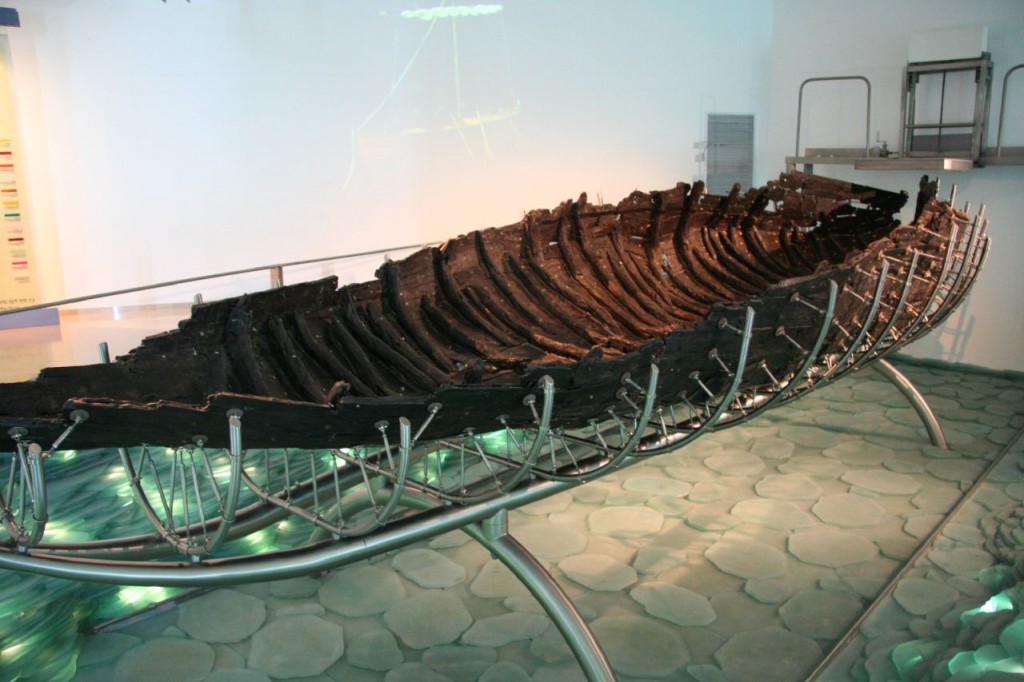 “As He got into the boat, His disciples followed Him. Suddenly, a violent storm arose on the sea, so that the boat was being swamped by the waves. But He was sleeping. So the disciples came and woke Him up, saying, “Lord, save us! We’re going to die!” But He said to them, “Why are you fearful, you of little faith?” Then He got up and rebuked the winds and the sea. And there was a great calm. The men were amazed and asked, “What kind of man is this?—even the winds and the sea obey Him!”” (Matthew 8:23–27, HCSB)

What kind of boat did the fishermen on the Sea of Galilee fish from? How big were they? Would 13 men fit into one comfortably? Come and see!

In 1986, an ancient boat was pulled from the mud along the northwestern shore of the Sea of Galilee. It was a unique and exciting find that gives us an idea of the sort of boat used during the time of Jesus.

The boat appeared due to a great drought during which the waters of the lake receded and was discovered by the brothers Moshe and Yuval Lufan, second-generation fishermen from Kibbutz Ginosar. The brothers reported that when they found the boat, a double rainbow appeared in the sky.

The subsequent archaeological dig was undertaken by members of the Kibbutz Ginosar, the Antiquities Authority, and many volunteers. Pulling the boat from the mud without damaging it — yet quickly enough to extract it before the water rose again — was a delicate process, lasting 12 days and nights. The boat then had to be submerged in a chemical bath for 7 years before it could be displayed.

The boat has been dated to the 1st century AD based on pottery and nails found in association with the boat, radiocarbon dating, and hull construction techniques. Evidence of repeated repairs indicates the boat was used for several decades, perhaps nearly a century. When it was considered beyond repair, all useful wooden parts were removed and the remaining hull sunk to the bottom of the lake.

The Galilee Boat is apparently the type of boat that was used on the Sea of Galilee for both fishing and transportation across the lake. It is likely that this sort of boat was used by Jesus and his disciples, many of whom were fishermen. Boats played a large role in Jesus life and ministry — they are mentioned 50 times in the Gospels!

There is no evidence connecting the boat to Jesus or his disciples, but it is certainly tantalizing to think that Jesus may have seen the boat sail by out on the Sea of Galilee — or even used it himself. But regardless of its history, the “Jesus boat” is a fascinating artifact that brings to life many of the Gospel accounts.

There’s Still Time to Register For This Trip!

Melodee and I want to invite you to join us on this amazing, once-in-a-lifetime trip. Don’t miss this opportunity! God wants to transform your life like He has done to us!

This is a 10-day trip leaving February 18th, 2013. We have made it easy for you to join us with a choice of departures cities across the country: You can choose to leave from Los Angeles, Chicago or New York.

Details and a brochure with all the details are located at this link. We encourage you to get your deposit in while space is still available!

Melodee and I are here to answer all of your questions! You can email us at: pastormatt [@] eaglesinleadership.org

We look forward to touring Israel with you in February!