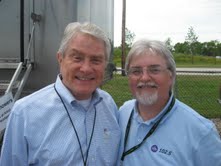 His radio broadcasts in both English and Spanish are heard by millions more on 3,000 radio outlets in 48 countries. His outstanding and significant contribution to the field of Christian communications was recognized in 2008 with the National Religious Broadcasters William Ward Ayer Distinguished Service Award.

Mr. Palau has authored close to 50 books and countless articles on issues of faith, and has counseled with business and political leaders and heads of state around the world. Luis Palau festivals have produced some of the largest audiences ever recorded in cities from south Florida to South America.

His ministry also includes the Next Generation Alliance®, created to grow and nurture partner evangelists, and the Livin It® Alliance, which uses action sport ministries, film and video to reach young people for Christ. His latest book, A Friendly Dialogue Between an Atheist and a Christian, quickly became a bestseller in China and released in the United States in February, 2008.

Luis and his wife, Pat, live in Portland, Oregon, where they have eleven grandchildren and four sons, three of whom are actively involved with the ministry.

For more information about Luis Palau, check his website