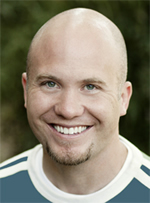 Eric Michael Bryant serves as an elder, speaker, and navigator overseeing the leadership team at   Mosaic in Los Angeles. Starting as a volunteer in the parking lot at Mosaic, Eric later worked with students and then helped catalyze new venues across Los Angeles. He also teaches at the Southern California campus of Golden Gate Seminary and is working on his Doctorate of Ministry with Bethel

Seminary. A sought-after speaker, Eric is one of the co-authors of The Uprising Experience, a workbook developed for Promise Keepers based on Erwin McManus’ book Uprising: A Revolution of the Soul, and has written several articles for Group and Relevant Leader magazines. His book, Peppermint-Filled Piñatas: Breaking Through Tolerance and Embracing Love, was published with Zondervan in June 2007. Eric lives with his wife, Debbie, and two children, Caleb and Trevi in the middle of Los Angeles County.
You can check out more about Eric at these great sites …

This entry was posted in Book Reviews, Interviews. Bookmark the permalink.