Book Review: Autopsy of a Deceased Church: 12 Ways to Keep Yours Alive

Posted on May 4, 2017 by Dr. Matthew Lee Smith
ShareTweet 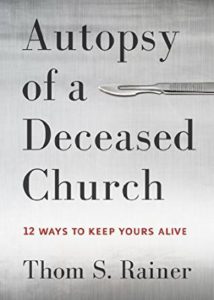 An estimated 7,000 churches in the United States close their doors every year, never to open again. And, as staggering as that fact is, tens of thousands of churches across America are close to the same demise.

Thom S. Rainer has written the book I had thought of writing many times while working in broken and dying churches over the past four decades.

Consider Autopsy of a Deceased Church a diagnostic tool to discover how close to the ER or morgue the church you are serving in really is! Rainer grasps that the dying or dead church has lost its missional heart. It focuses on the “good old days” and considers the past “glory days” something to be enshrined.

Fossilizing the past, the dead church refused to change with the times and the community. As a result, the people who held the power decided that they were the focus of the finances and programming. Autopsy of a Deceased Church reveals what happens when the preferences of the decision makers within the church neglect the needs of the broken outside the campus.

One sure evidence of a church on its way to the morgue is its inability to keep a pastor for a long time and the size of the gaps between pastors. Autopsy of a Deceased Church explains how the preferences of the people and the “Great Omission” become the toxic poison that brings about an unwillingness to follow the new leader and accept that change much happen for life to blossom again.

When the church’s focus becomes itself instead of reaching the people for whom Christ died, prayer times are more biological – Jack’s back and Jane’s pain – instead of missiological – reach one more for Jesus. Autopsy of a Deceased Church demonstrates how this lack of clear purpose on the Great Commission spells the end of its existence.

As the church becomes more of a small group, it grows increasingly obsessed with its facilities – many times the very anchor that has been dragging itself into the murky abyss for years. Since the facility eats up most of the budget dollars, Autopsy of a Deceased Church shows how the mission is under- or non-funded to the extinction of that Gospel center.

In the remainder of Autopsy of a Deceased Church, Rainer posits twelve responses if one finds themselves inside a dying church. Broken into three segments of increasing urgency, the reader is given hope when there are symptoms of sickness, when the church is very sick and when the church is dying.

EVERY leader and member of EVERY church in America should read this book and the concerned should lead a group in their church with this book. The truths here – even if you are in a healthy church – will be so eloquently and boldly stated that they will make an indelible mark on the heart and soul of even the more jaded reader.

Autopsy of a Deceased Church is a must read and you can order your copy by following this link.